Here are some breathtaking panoramic views from Matheran, a hill station in Maharashtra, India. They are images stitched from 2-3 photos and show deep valleys, rolling hills, trees and bushes.

In the first image there is a tree in the foreground (to the right of the picture), and a range of hills stretching far out into the distance. 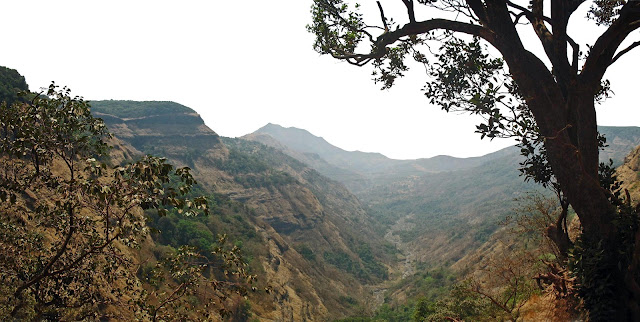 The second image shows some bushes in the foreground and the deep valley and hills in the background. It is the same scene from another angle, without the tree.

In this image the tree is to the left of the panoramic scene. The red mud of Matheran in the foreground makes a nice contrast to the green of the valley and the blue of the hills beyond.

The photograph below shows just the hills of Matheran.

The hillocks seen in this image were shot on the way to Matheran. They make an interesting scene, showing the plains beyond. The foreground is a bunch of trees and bushes.

Related Images: Panchgani scene of lake and hills or Scenes from the Matheran Mountains or Ghat or if you are looking for a  really green nature scene, try this: Free Headers of Nature Scenes - Lake and Trees. Or click on the label "Nature Headers" if you are looking for free nature headers for your blog. For Urban landscapes which can be used for headers click the label Urban Landscapes. If you click the label Headers, you will find both nature as well as urban scenes.