Vendors and food stalls on the island of Koh Samui, Thailand.

A woman selling short eats and snacks outside a tourist spot on the island of Koh Samui in Thailand. Eating food from vendors is inexpensive. You get a wide variety from the different vendors. 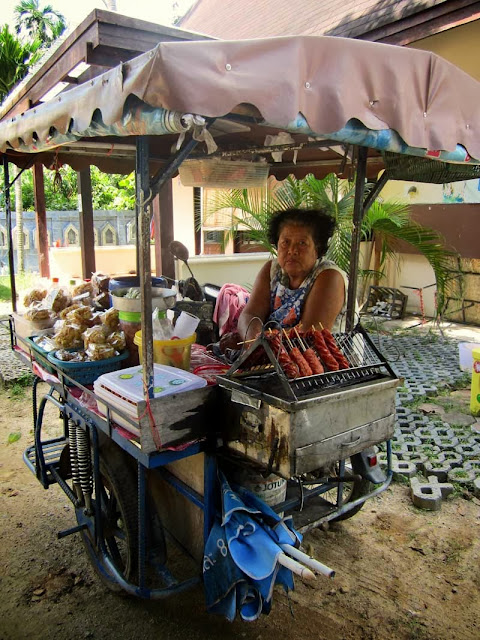 A young woman vendor selling food in sealed packets on the island of  Koh Samui, Thailand. 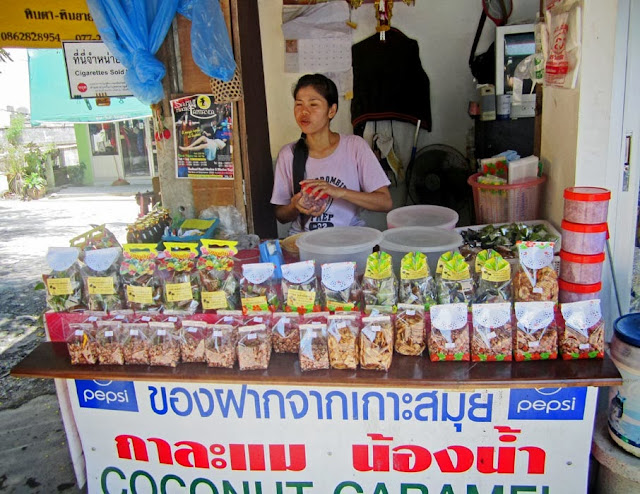 A young man selling a wide variety of snacks like banana pancakes and different type of sandwiches on the island of Koh Samui in Thailand. He has a gas cylinder attached to his mobile cart. He cooks here. 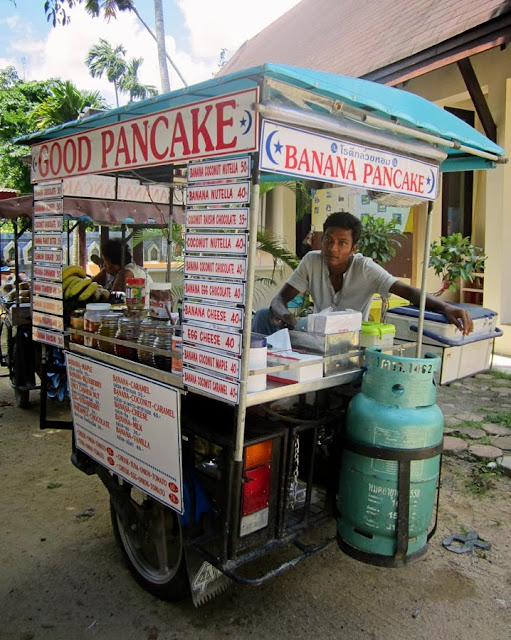 Related Images: Koh Samui Outdoor Airport or Fishing Trawlers in the Gulf of Thailand
Fruit Vendors vs supermarkets in India or Road-side food stalls or street food in India or Young woman selling raw mango slices in South India.
Or check out all the images taken in Thailand. 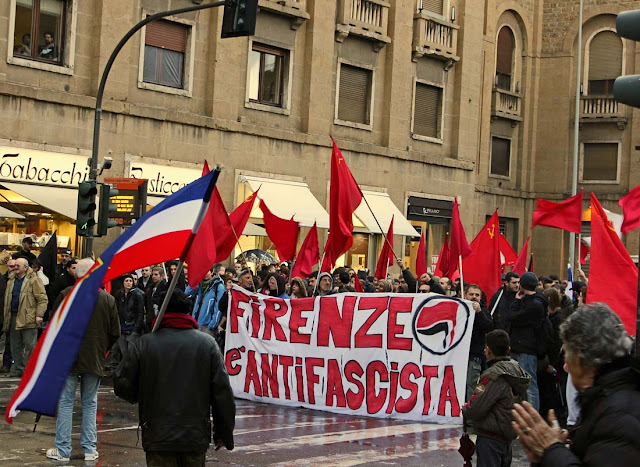 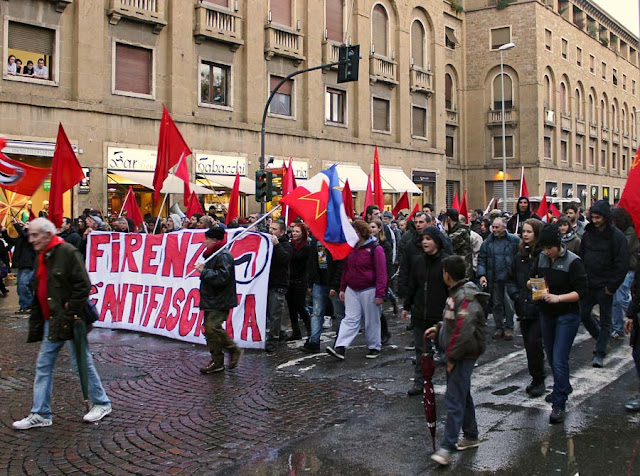 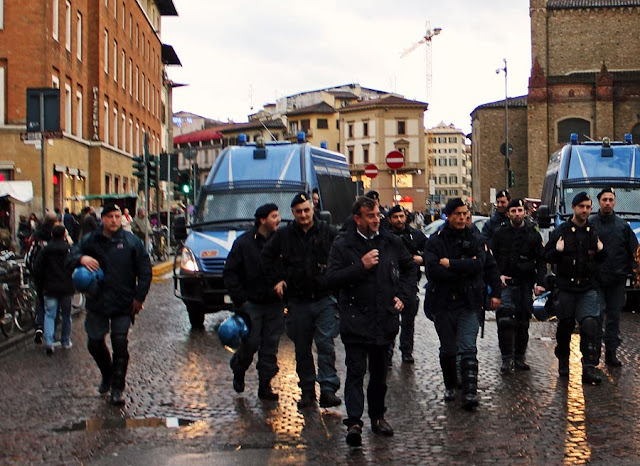 The Dubai Mall is the world's largest shopping mall if one goes by area. It's in Dubai (UAE) and opened in 2008. It is a popular tourist destination, probably because it is right next to the world's tallest building, the Burj Khalifa and houses an impressive aquarium. You can access it from Doha Street, and also from the metro.

A view of the inside of the Dubai mall with the Aquarium on the left of the picture. 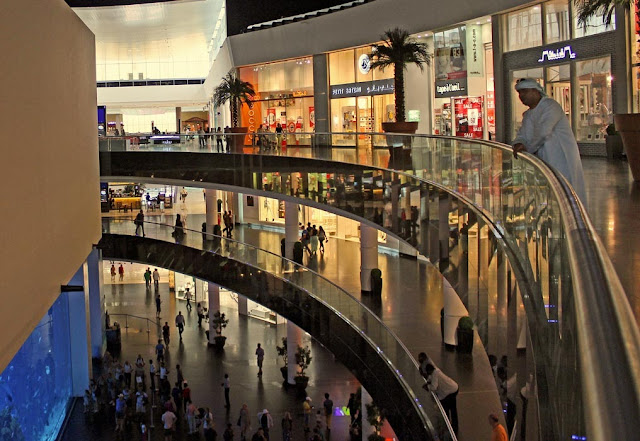 This is a view of the entry into Dubai Mall if one uses the metro. There is a subway or walkway right into the mall. Though it is very long, the moving walkway makes it easier. 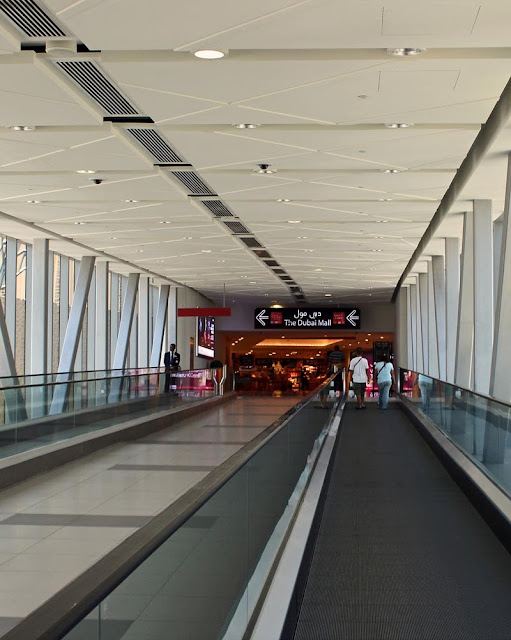 The entry into the Dubai Mall 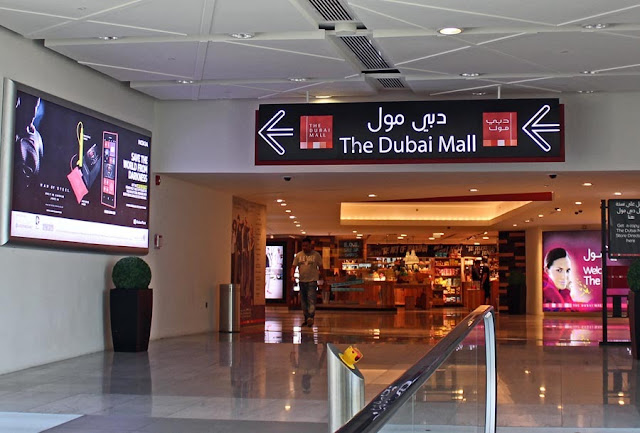 Related Images: Inexpensive shopping in Bangkok
Or for images of shopping complexes in India: Mumbai Malls in the Suburbs of Mulund and Malad or Mumbai Malls Exteriors or Interiors of Vashi Malls or Pune Malls - Photos 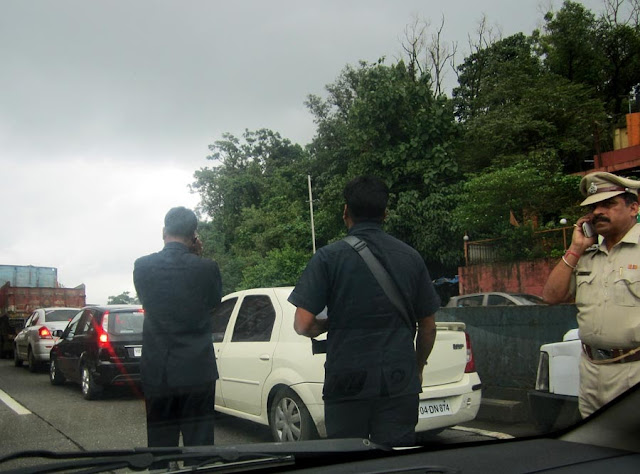 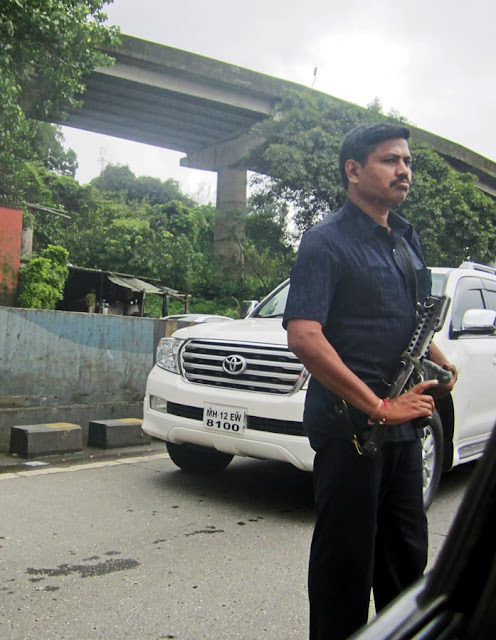 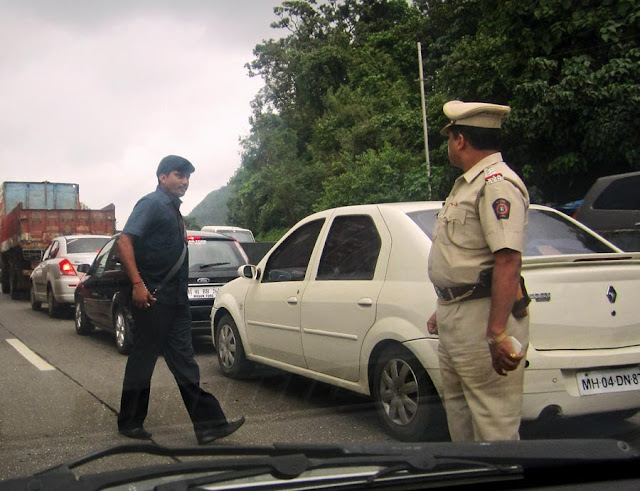 This is a photograph of a person in Arab or Islamic dress, which is a long white robe called the "Thobe," teaching the Koran to three young boys also clad similarly. This ankle length robe is usually white. The young boys are wearing it too, along with a head scarf (ghutra) which is usually worn by men in the middle east. This scarf, is usually white, or checkered red/white or black/white and is tied with a black rope band. This scarf is also shemagh or kuffiyeh.

This photograph is not of real people, and was taken in a museum in Dubai. These are mannequins. 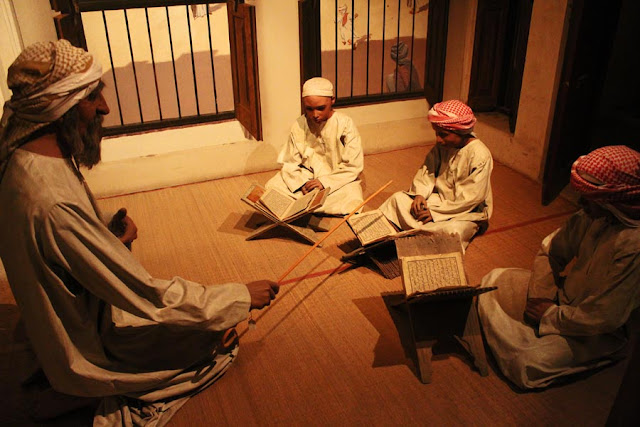 Ancient Middle Eastern Jewellery in the Dubai Museum. Intricate and heavy. The first photograph is of heavy bracelets and necklaces, often worn in ancient times. They are made of silver. 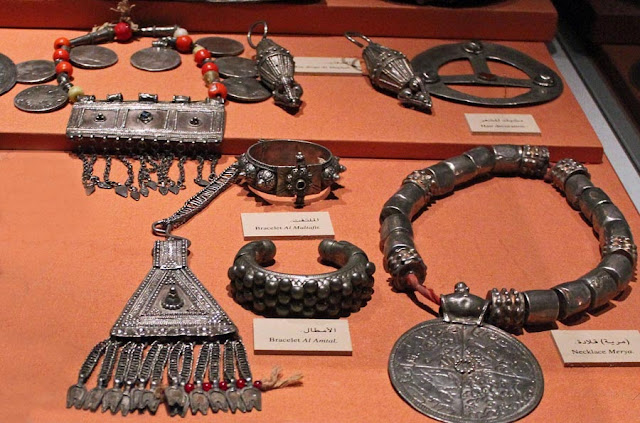 The rounded piece of heavy silver jewellery so intricately carved is an anklet. The one below that is a hair decoration. 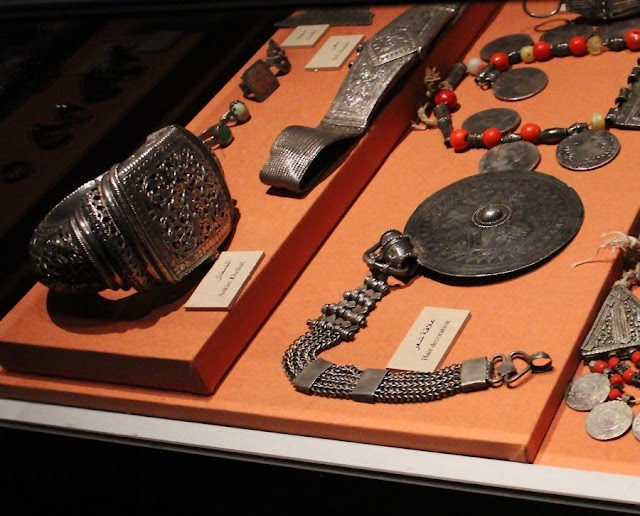 A heavy necklace made of large silver coins, and red and silver beads. 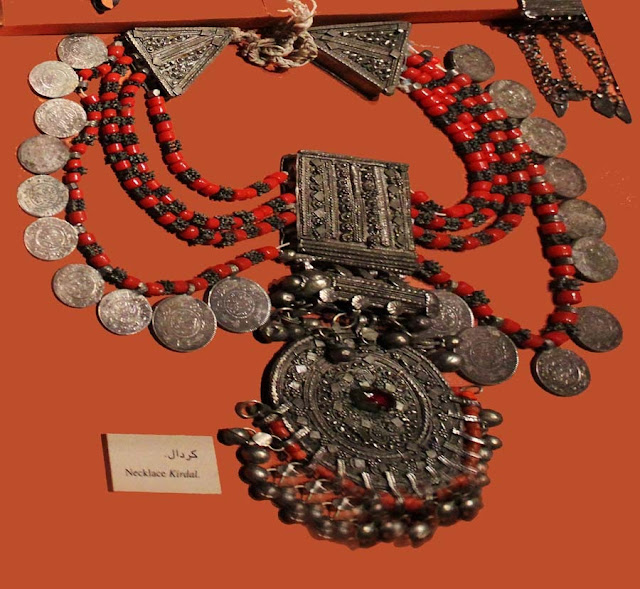 More pictures: Tourists buying jewellery in Istanbul, Turkey or Costume jewellery beads and necklaces sold in Mumbai or tribal Women's earrings in Maharashtra.
Or check out all the photographs on this blog about Dubai.

If you thought only Indians prayed to Ganesha, think again. Here is a local person in Bangkok kneeling down before a golden statue of Ganesh (also known as Ganpati) in the city of Bangkok in Thailand. Ganesha is a Hindu deity, and his images are found across India, Nepal and some in Thailand. Jains and Buddhists also worship Ganesha. 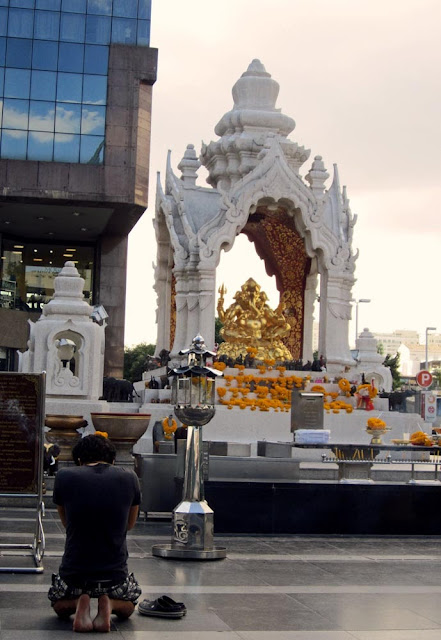 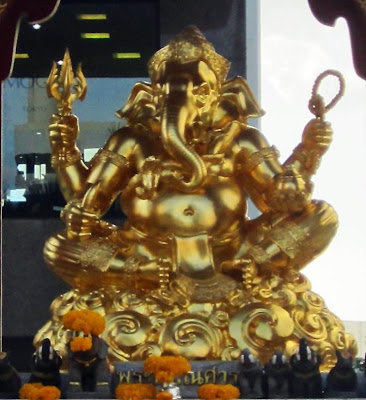 Related Images: Ganesh Pandal decorations on the streets or  Ganpati or Ganesh sketches
For images of Ganesh Idols lit up with decorative electric and psychedelic lights see this post: Ganpati at Night
More related Images: Indian cities lit up at night with Diwali lights or Priest performing a Pooja or Hanuman Temple
For religious symbols from Hinduism: Swastika graphics from India or Paduka or Guru's feet or or Shiva Pindi or Lingam

Menacing killer rods sticking out of trucks are common in India, and not just on highways. According to news reports, trucks carrying rods sticking out of the back were responsible for 6,743 accidents in two years (2009-11) and caused 3,707 deaths. Life has little value in India because police don't stop these trucks. Maybe there isn't any other way to ferry these rods needed for construction. The little red piece of cloth is not enough to warn oncoming traffic, and it's very dangerous in the dark. 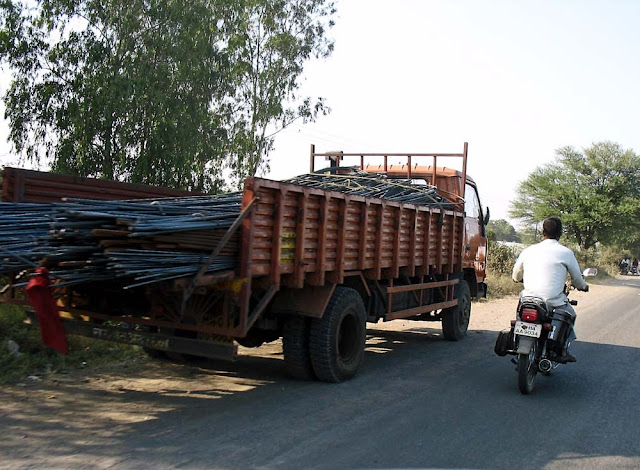 Overloaded trucks are common. This truck looks unbalanced. We just have to hope that the material it is carrying is not heavy. 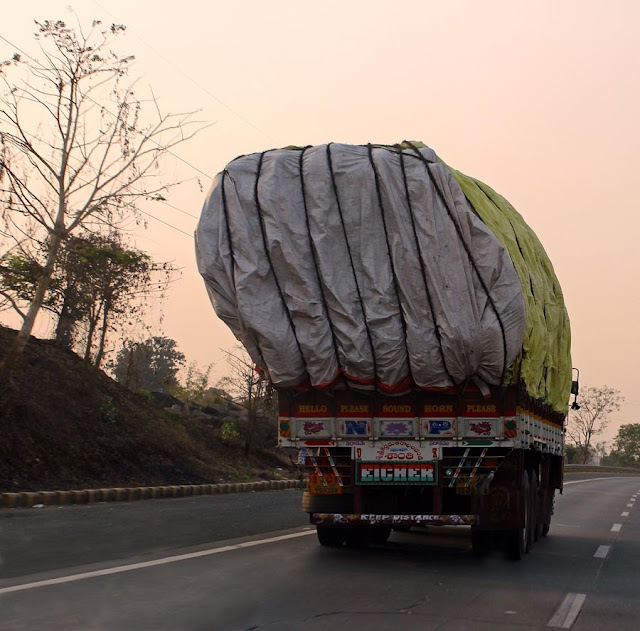 No idea what this truck is carrying. Whatever it is, and however light it is, this is no way to load a truck. 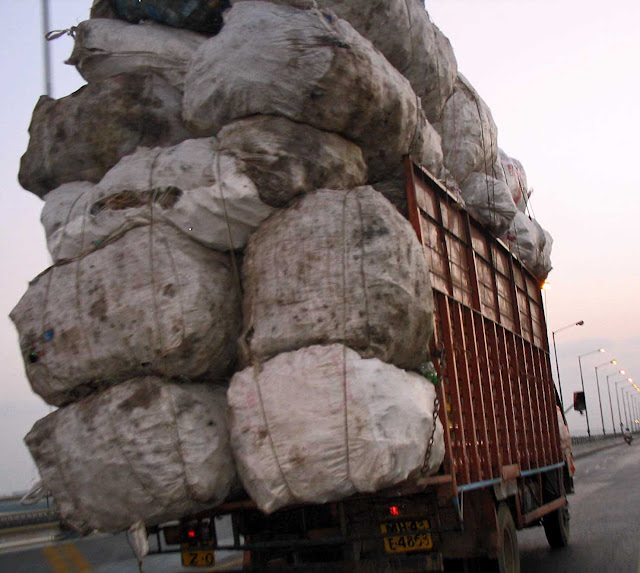 Related images: Photos of trucks or Garbage trucks or dumpers in India or Truck Drivers in India
More: Truck Art and Truck Painting or Fire Station and Fire engine

Definitely something an Indian village would be proud of. Everyone uses toilets in this little village. No open defecation. The sign says its proudly. That the village is free of shitting in the open and that is a step towards good health. A drainage system is in place and people have toilets here. Progress for this little town in Maharashtra. 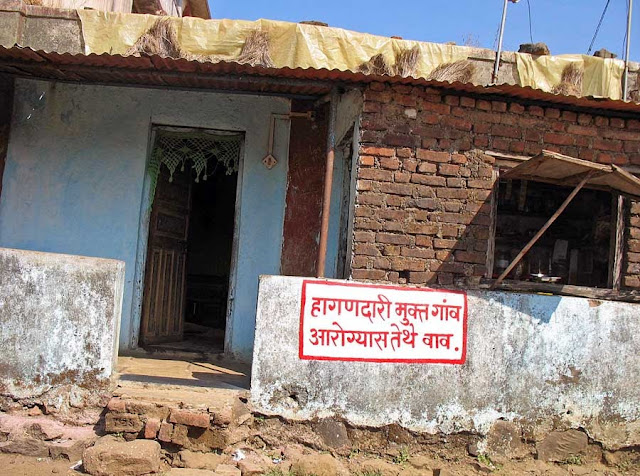 Wrong English but punny. Blatant I would say, this banner in Kerala. 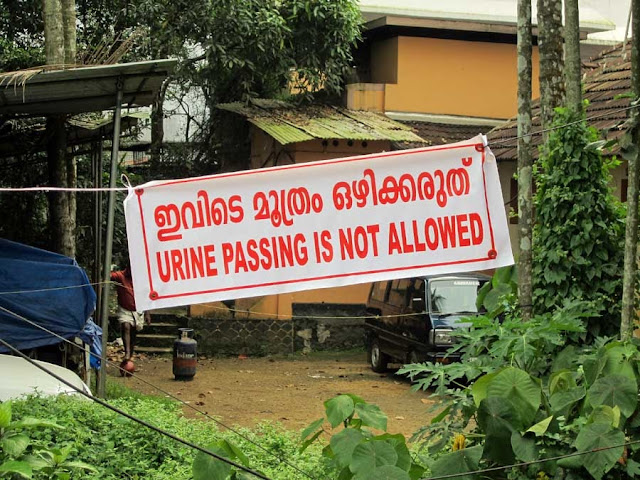 Switzerland is no stranger to funny signs, only that this Mc Clean Sign which lets you know what they charge for using their toilets is not really funny because they actually demand more money if you are going to do number two, use the WC as they call it. Considering that you have to pay upfront, before you go in, it's a little awkward don't you think. I used this facility once, the 1 Fr. one for the Pisso as they call it, but a fat old lady had her ear to the door, to ensure that I was doing the job I paid for! A little sickening huh. Perverted, but funny! 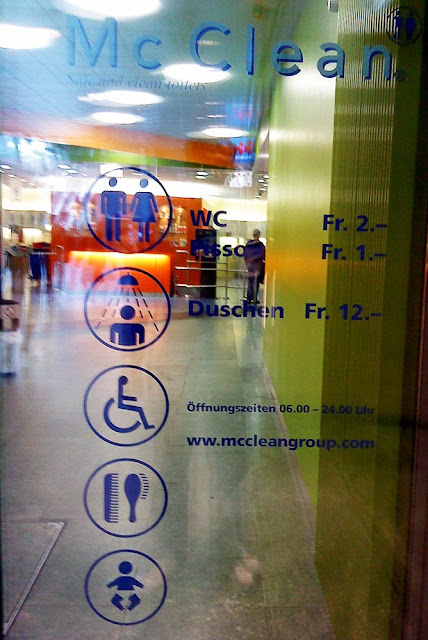 You might also like Funny Signs from Thailand or Happy Birthday Political Posters or Interesting signs with funny instructions! or Funny English Signs or Thieves beware signs from the UK or Funny Road Signs in India or or Toilet Humor