These are silhouettes of young couples sitting next to each other. All the images have been drawn from different couples. They can be used only in the sizes on this post or smaller. With each image I have tried a slightly different technique.

In the first image you have a young couple leaning towards each other, as if in the middle of an intimate chat. They have been cut out of their original background, and a white outline defines the edges. 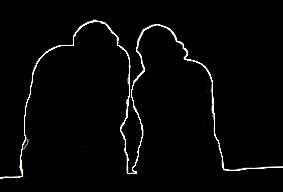 This is another couple, engrossed in reading the newspaper. Or rather it seems as if the girl is reading the newspaper while he sits holding her hand. The girl is wearing a salwar kameez. A part of the background has been retained in the image, the greenery on the left and the brown wall they are sitting on. This can be considered a part illustration, not just a silhouette. The picture below is of a couple I shot on Marine Drive, from quite a distance. They were engrossed in each other, the woman leaning towards him, hanging on to every word he said. She was wearing a traditional saree. The city scape lies in the background, in blue-gray. The couple and the ledge they are sitting on, is coloured black, giving it an effect of an illustration.

This is more of a photograph, with the couple silhouetted against the background of a beach. It does seems as if the couple is not communicating very well. The girl's body language tells us that she has other things on her mind. Maybe they have had a tiff. The girl is leaning away from the boy, and the boy staring into the sea beyond. 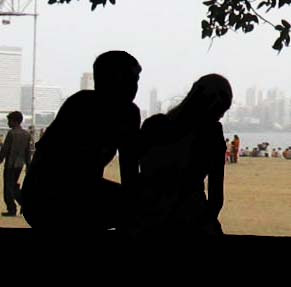 This is a couple coochie-cooing against a bluish gray urban landscape of skyscrapers. Perhaps the title "The Urban Couple" is apt for this drawing. 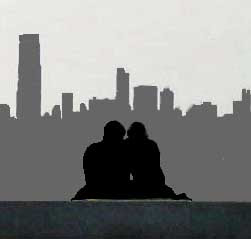 Related Image: Wedding couple silhouette  or Sketch and silhouette portraying a gay couple
Or try the label Silhouettes or the label Sketches for more silhouettes and sketches of people with bags, people walking, and that of important monuments from different parts of the world and also of other places.