These are screenshots of television news channels during the farcical arrest of social activist Anna Hazare in New Delhi yesterday. These images are from English and Hindi news channels.
Anna's arrest created a media frenzy, evident in these scenes captured from different television channels.

This is an image from the English channel Times Now. Anna Hazare Arrested the channel screams. 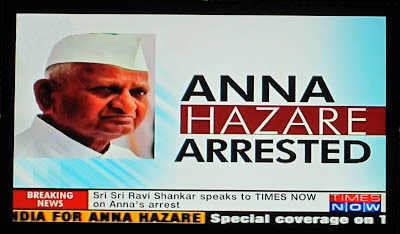 Live India, a Hindi channel has a dramatic picture of Anna Hazare staring defiantly from  behind bars. 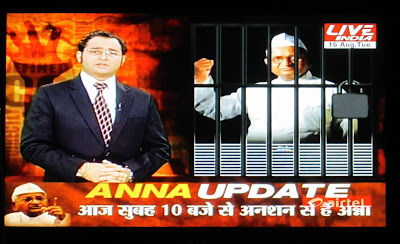 People protest all over India. Headlines Today, an English channel showed this image of people protesting in different places. Most channels showed clips from other places besides Delhi. 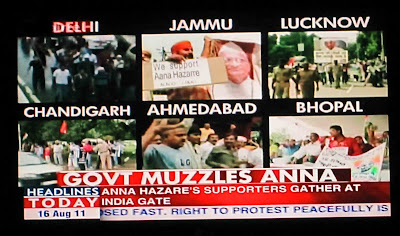 This is a scene of a huge number of people on the streets in support of Anna Hazare. 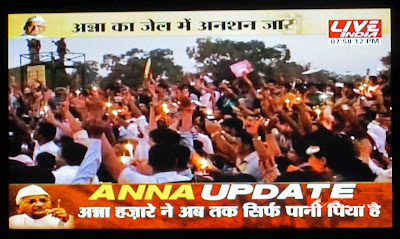 Anna Hazare is being likened to Mahatma Gandhi. 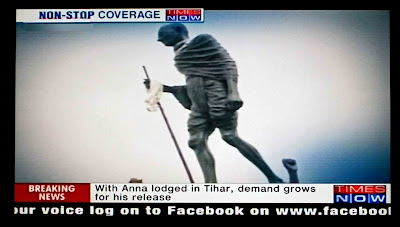 Within hours the government seems to have panicked. First some of Anna's associates who were arrested (eg. Kiran Bedi) are released. Then there is news that Anna Hazare is being released. This is an image from CNN-IBN and it tells us that the police have sent a release warrant to Tihar Jail where Anna is lodged. 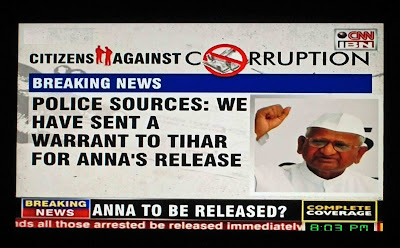 All news channels are reporting it now. This image is from the Hindi channel Total Live. Anna Hazare is to be released but negotiations are on. The government of India is not showing any signs of sense, sensibility or leadership by these tactics. One wonders if Rahul Gandhi is in the lead. Or is it Chidambaram? Surely it cannot be Manmohan Singh? Just curious to know whose strategy this is...or wait maybe they have all put their heads together!