There are many things which are held sacred by the Hindus and these symbols are usually either found near the dieties or used in religious rituals.


This is an image of a copper vessel and a coconut standing in it. Used as an offering to the Gods. The Swastika, an ancient Hindu symbol is also seen in the image. 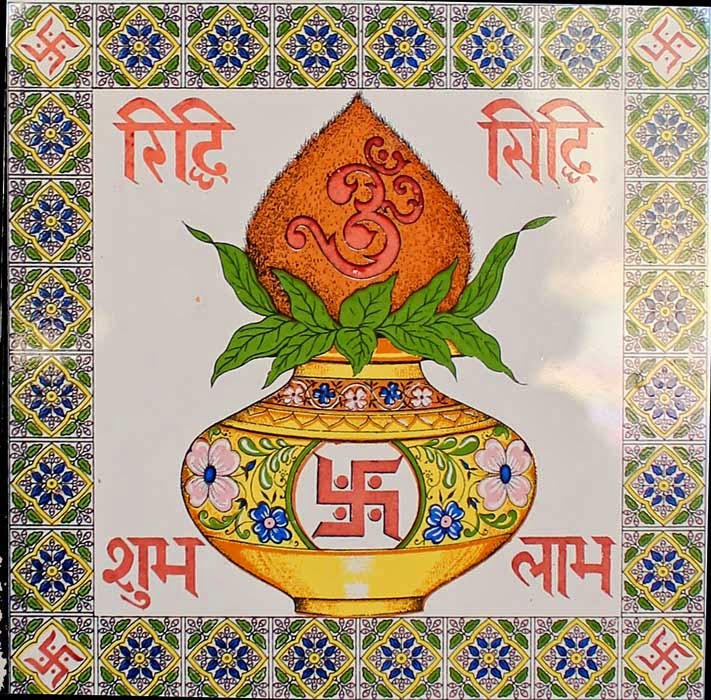 Each arm of the Swastika as per archaeological evidence represents "the processional equinox and solstice around the pole start". Other old civilizations around the world like Turkic, Iranian, Armenian, Nepalese, Chinese, Japanese, Korean and European have also been associated with this symbol. It is still commonly used in Hinduism, Buddhism, and Jainism. It signifies wealth, prosperity and auspiciousness. 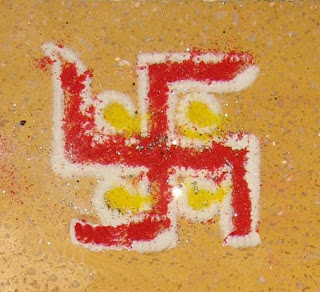 Flowers are commonly used for worship in all religions but Hinduism favours certain flowers. The
The Chapha or Plumeria in English is used frequently for the worship of Hindu Gods. Here it is seen decorating a Trishul, another sacred Hindu symbol. 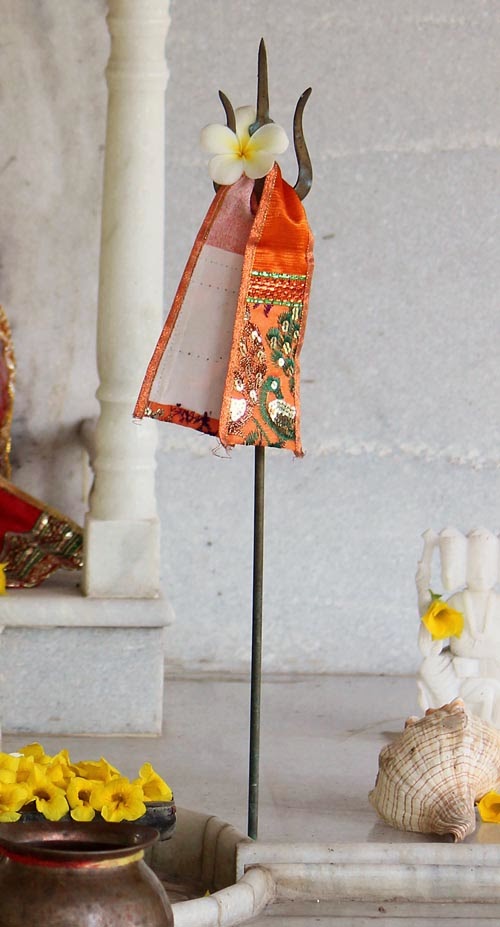 The Trishula considered a sacred symbol for Buddhists as well as Hindus. The Hindu God Shiva uses this three pronged weapon as seen here in this picture. So does the Goddess Durga and also some other Hindu dieties.  The three points of the Trishul are supposed to represent the trinities of  creation, maintenance and destruction - The Past, the Present and the Future.
In the human body, the trishula is also meant to signify the place where the three main nadis, or energy channels (ida, pingala and shushmana) meet at the brow.

And don't miss the Om symbol on Lord Shiva's palm. Written as ॐ in Devanagari, the Om is a type of mantra and mystical Sanskrit sound of Hindu origin. It is used for chanting during Yogic exercises. It is important in various religions such as Hinduism, Buddhism, Sanatana Dharma and Jainism. 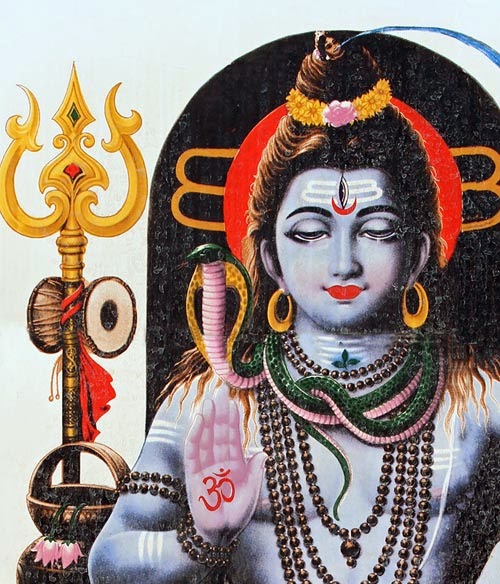 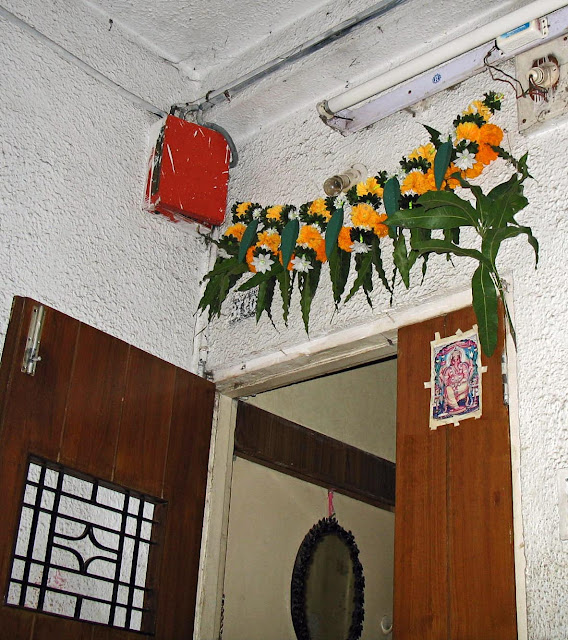 A small temple in Thailand where orange marigold flowers are used for worship. Incense is also seen here. Again frequently used for the worship of God in most religions, including Christianity in India. 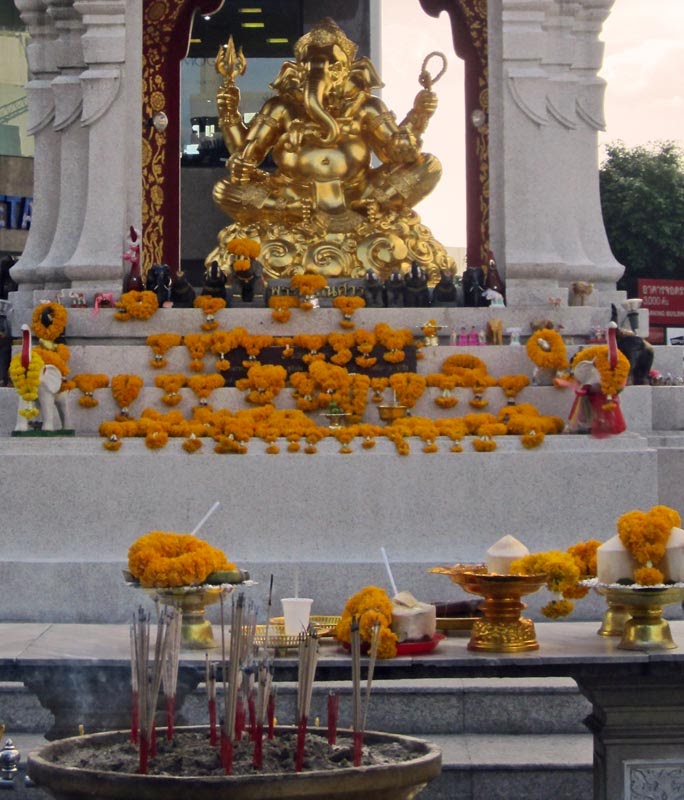 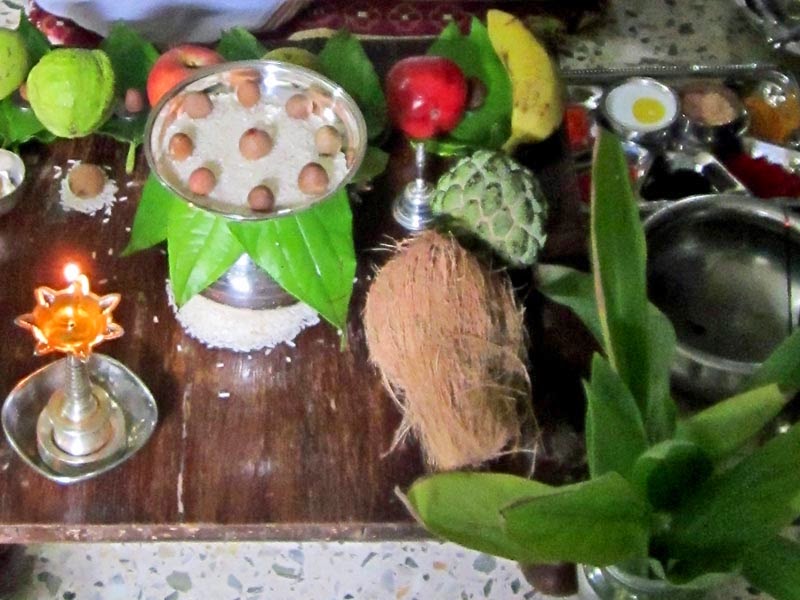 The Rudraksha is a necklace made of the beads from the seeds of the Rudraksha or Rudraksh tree, which is a large evergreen broad-leaved tree. These beads are used prayers and rituals in Hinduism and are also made into jewellery. Many fake ones are also available. The ones on the extreme right of the photograph are the rudraksha bead necklaces, the dark brown ones. These are usually available outside some temples or religious places. 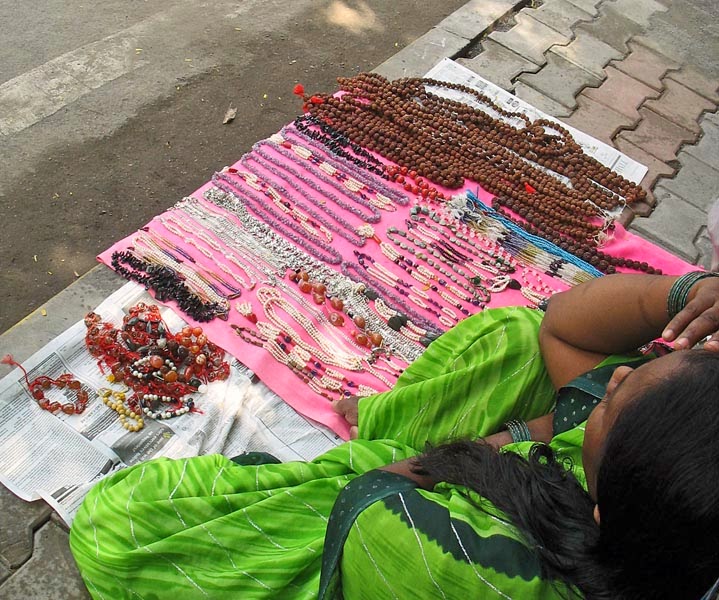 For other religious symbols from Hinduism: Swastika graphics from India or Paduka or Guru's feet or or Shiva Pindi or Lingam or Significance of Nandi in Hinduism or or Diya graphics and illustrations and Sketch or  Significance of Animals and other life in Hinduism
Or check out all the photographs filed under Hinduism, Ellora, Art, Culture or Religion or Temples
More Related Images: Indian cities lit up at night with Diwali lights or  Priest performing a Pooja or Hanuman Temple