These are photographs of Buddha sculptures from the Ajanta Caves. These caves are cut out of sheer rock and belong to two distinct phases of Buddhism. The Hinayana phase from the second century BC to the first century AD and the Mahayana phase from the fifth to the sixth century AD. The paintings and sculptures in these ancient caves have been done during these periods. For a view of the paintings of Ajanta go to the links given at the bottom of this post.

While many ancient temples in India were destroyed by Mughal invaders, the Ajanta and Ellora caves survived due to their remote location.

The images of the sculptures of Buddha in this post are from different caves and not in any particular order. The first few images have more clarity as they were shot in daylight. Inside the lights are dim, and flashlights not permitted.

The first three pictures have been shot in the daylight. The sculptures are outside, on the exterior walls of the caves. 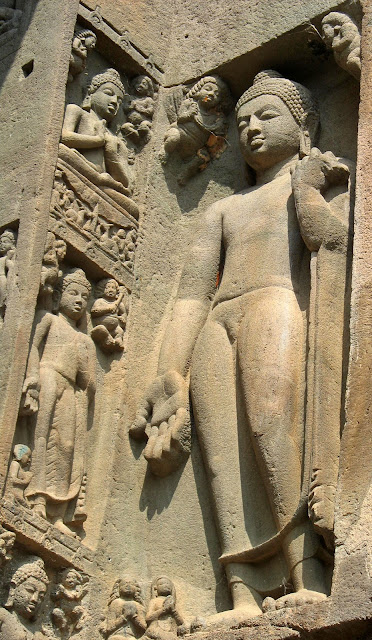 The next one is of Buddha with a consort. The stone has deteriorated due to the vagaries of time, but it's amazing that it has lasted so long! If you click on the picture you will see how porous the stone is now. 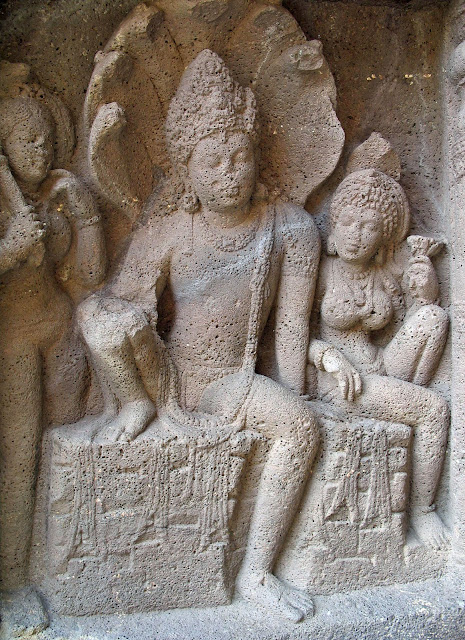 One can only imagine the original paint that once covered this stone depiction of Buddha.

In this photograph the figure of Buddha is sitting in a lotus position inside an inner sanctum inside the cave. The golden light is due to the artificial light in the cave. All around the inner sanctum there are figures of Buddha carved into the stone.

The next picture was one of the hardest pieces of art to capture as it was very dark inside the cave. One had to peer at the sculpture to see it. It was like clicking in the darkness. The photograph has been brightened to a large degree. The Buddha was in an inner sanctum deep inside the large cave, known as Cave No. 1. The bluish light is an artificial light casting its dull glow. 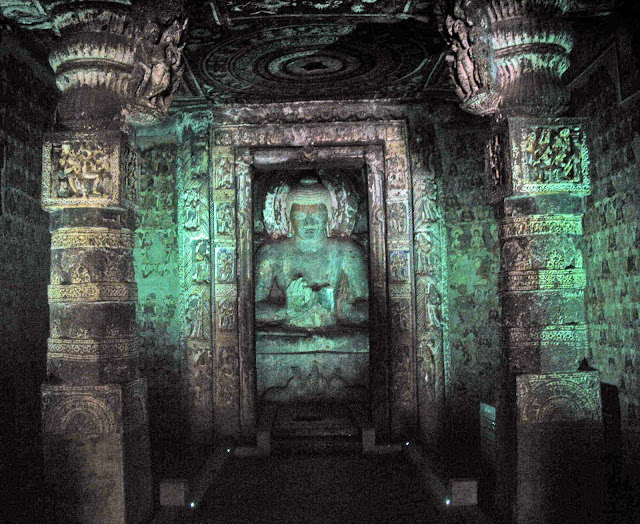 This huge eight feet long sculpture of the sleeping Buddha is a famous icon of Ajanta and lies in Cave 26. 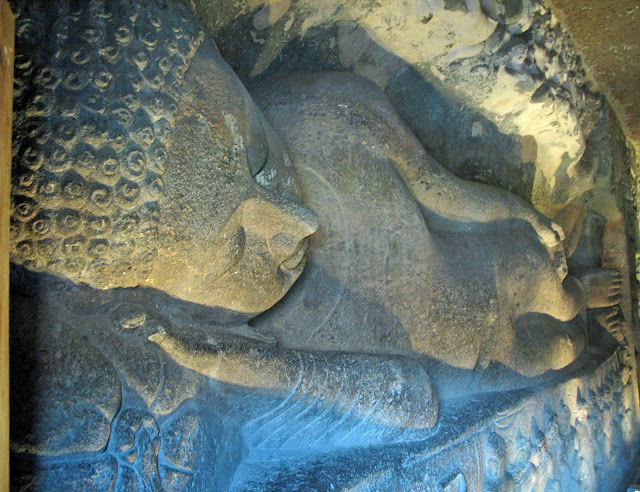 This sitting Buddha was inside a large cave with much of the cave was in poor condition due to centuries of neglect. The once colourful murals on the wall are faded and worn. 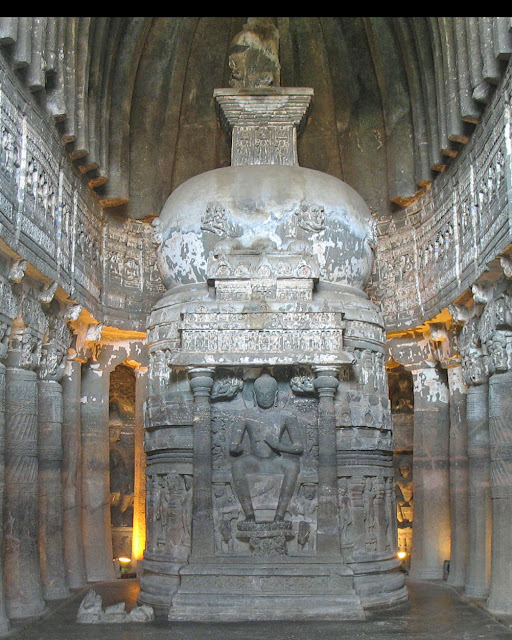 The ever graceful and beautiful figures of Buddha can be seen in the photograph below. 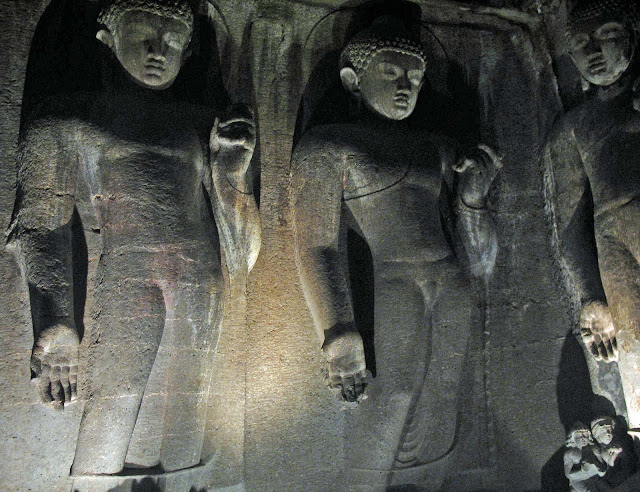 The picture below is a depicts the Buddha in a stone fresco. 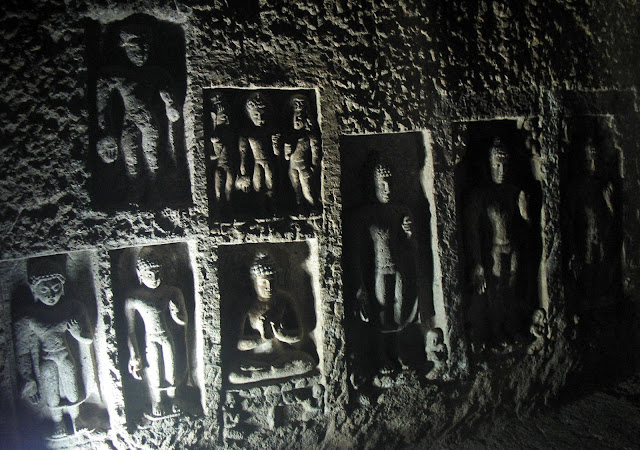 The photo below is a part of a large fresco at Ajanta. The figure of Buddha can be seen to the left of the image. 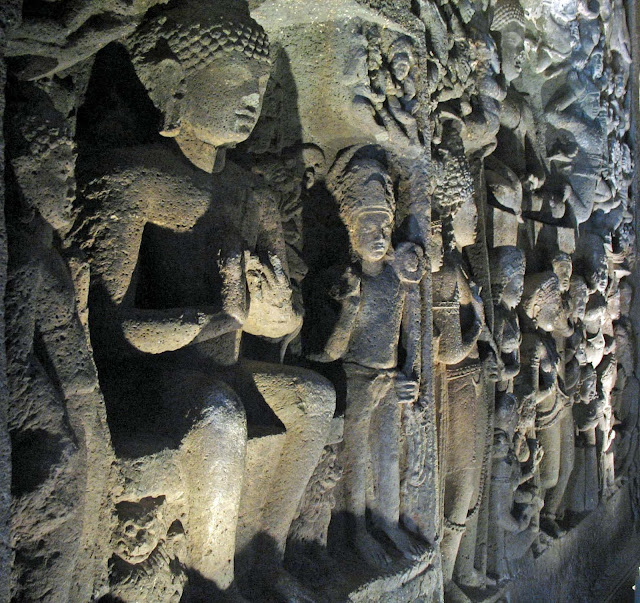 The picture below is a breathtaking sculpture or fresco of Buddha surrounded by beautiful women. He is in a meditation pose. 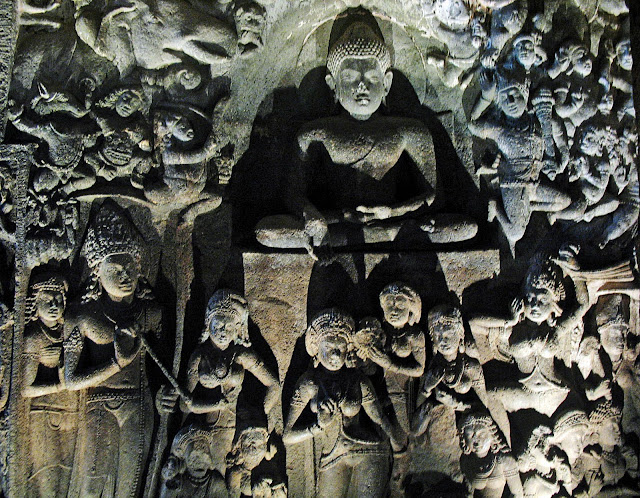 This is a Buddha fresco in one of the temples at Ajanta. The carvings are above the pillars and near the ceiling. 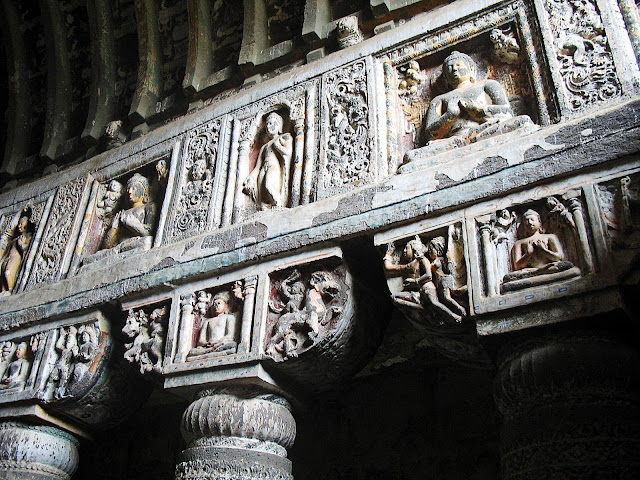 For images from Ellora try these posts: Kailashnath Temple at Ellora or Ellora Temples sculpted exteriors or simply click on the label Ellora.