The Parthenon is an ancient Greek Temple dedicated to the Greek goddess Athena (438 BC). It lies in ruins today. It has an interesting history. Built on a destroyed temple, it was used as a treasury like most ancient Greek temples. In the 5th century AD, it was converted into a church dedicated to the Virgin Mary and in the fifteenth century Ottoman Turk converted it into a mosque. It was destroyed in an accidental explosion in the late seventeenth century as it had been turned into an ammunition storage place. In 1806, some of the remaining sculptures were removed and sold to the British Museum. The Greek government is trying its best to get them back, but it looks unlikely! After all Britain has a lot of stolen treasures, including the Queen's diamond (Kohinoor) which they stole from India. If they give Greece back its sculptures there will be a line of countries demanding their treasures back!
This is a view of the Parthenon temple from a distance, from the musueum. Not much of it is left but the Greeks are trying to restore it.
It lies on top of a small plateau. 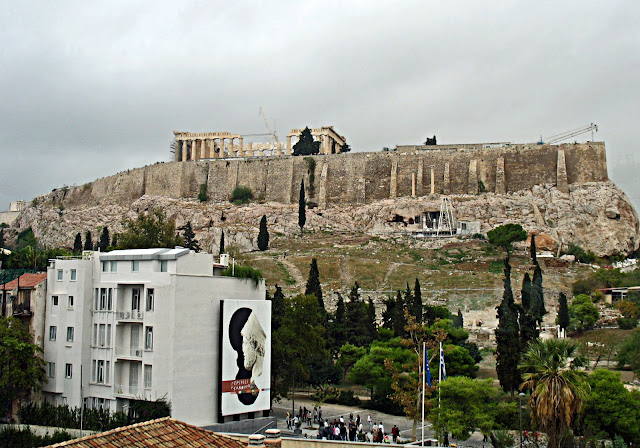 A closer look at the Parthenon, which is an example of the classical Greek architecture, the Doric style.  The white marble seen in some places is new, having been newly constructed. The yellower stone is the ancient marble which has yellowed with age.