Gandhian principles explained by the Wheel of Life

The word "Wheel" is associated with Mahatma Gandhi as he used the spinning wheel as a symbol of freedom (from British Rule). A Wheel of Life exists in Buddhism as well, said to be made by Buddha himself.  The Wheel of Life depicted here has nothing to do with any religion, whether Buddhism or Hinduism. It simply stands for Gandhian principles and the Gandhian way of life. It tells us about Gandhism in a nutshell.

The wheel explains what it means to be a Gandhian with Truth or Satya and Non-violence or Ahimsa at the core of existence. Love, Strength, Food and Knowledge are in the circle after that, next importance. Subjects which are important after these basic ones are Sociology, the Art of Teaching, Health, and Economics. After these basic values, one has to give importance to larger societal issues like Cleanliness and Hygeine, a Casteless Society, Mother Tongue, Upliftment of Women, Equality, Village Development, Service to Harijans, and  Nai Talim which can loosely be translated as 'Basic Education for all.' However for a more holistic meaning try the wiki.

The use of Khadi is also given importance although it is not relevant today. It was more important during British Rule when Indians were forced to buy cloth made in England. Hindi propagation is also given importance, and this was considered important by Gandhi to unite the nation at that time. This is less relevant today as people have realised that adoption of Hindi can lead to giving less importance to one's own mother tongue, although not many Hindi speakers share this view.

Interestingly service to Harijans and other castes has been clubbed with upliftment of women. Women have been considered the lowest caste in India, unworthy of equal treatment to men.

This has been put up in Gandhidham, Ahmedabad, where the Mahatma Gandhi Ashram is. I have changed the colors of the background as the original framed picture was rusty and discoloured. 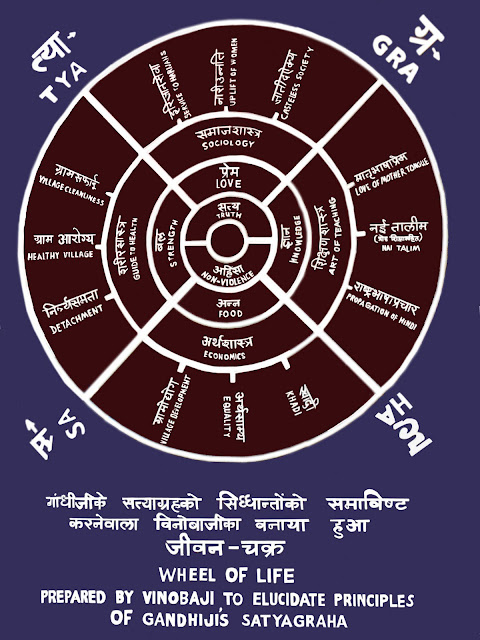 Please click on the picture to see a bigger image of the Wheel of Life.

Read his famous sayings which have been framed and put up at Gandhidham: Mahatma Gandhi quotes
More related photographs: Postcards written to Mahatma Gandhi without an address or Mahatma Gandhi and Gandhidham in Ahmedabad - Portraits and Paintings or  Free Images of the Indian Flag