The Tarpa wind instrument is played as an accompanied to the Tarpa dance which is usually performed during the harvest season. It is a joyous time.Tarpa is a folk dance of the rural and tribal people of Dadra & Nagar Haveli and surrounding rural and semi-rural areas in Maharashtra, India. The Tarpa is popular amongst tribal groups like Kokna, Varli/Warli and Kolis.
The tribal people make this musical instrument themselves out of the material available in the forest. Bamboo sticks and gourd is used to make it. The Tarpa musical instrument makes a sweet sound that is akin to the melody played by a snake charmer.

The musical instrument which is portrayed in this photographs is the authentic one used by the tribes and is made by them. 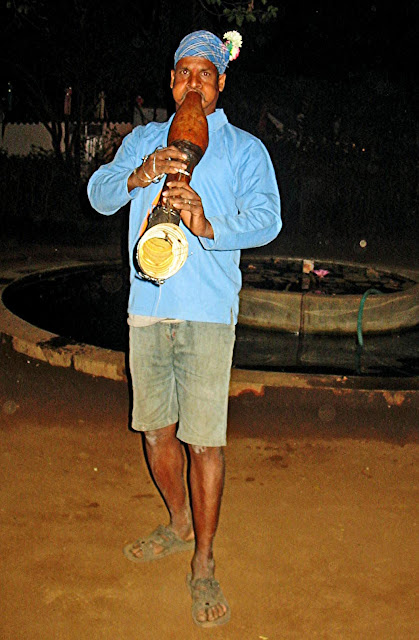 Related Images: Photos of the paintings and art of the Varli or Warli people: Warli Paintings Photographs
Or pictures of Adivasi Dancers from Matheran
Or check out a photograph of a musician playing a rather large wind instrument in the London Metro: Musician in the London Metro