These are photographs of an ancient temple in Sadashiv Peth, in the heart of Pune city. It celebrates the deity Narsimha, an avatar of Vishnu.
In the photograph below there is a the narrow road outside the temple. No one would guess that an old temple lies inside. The structure itself is derelict from the outside. 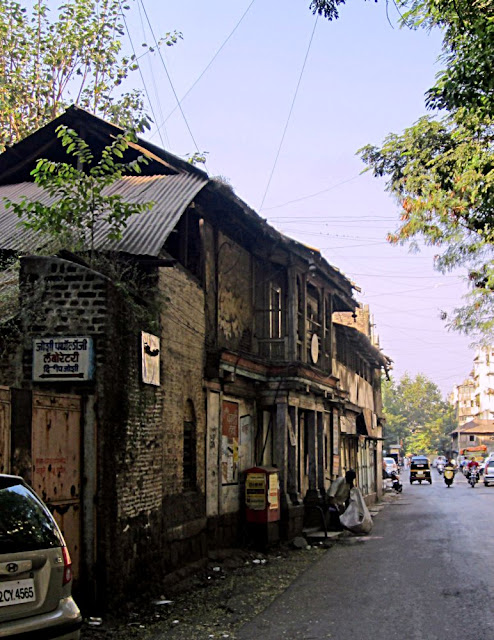 A closer look at the gate or entrance of the temple The date it was established is clearly given here: 1774. It's called the Laxmi Narsimha Mandir. The pillars and arches are made of stone and wood. Laxmi is Vishnu's wife and her idol is also present in this mandir. 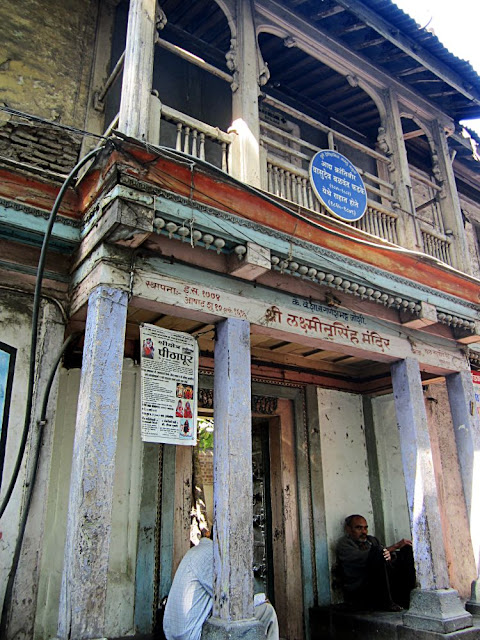 The the heavy wooden door that gives you entry into the temple. The thick brass ring in the centre of the door is the door knocker. In the olden days such knockers were common as there was no electricty for bells. 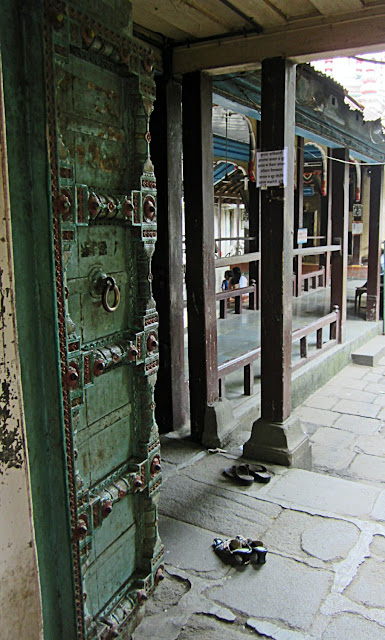 This is a closer look at what is called "Umbartha" in Marathi and is called the "Threshold" or "Saddle" in English. It is a door part and makes up the door frame. It is the slightly raised platform underneath the door. This one is made of engraved brass. 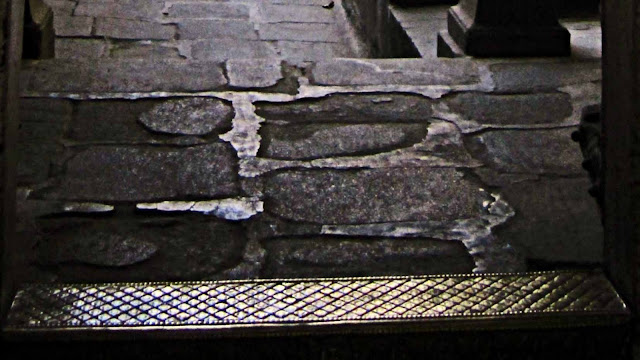 This is a view from the left side of the temple from a gate that is usually shut. The steeple of the temple has been freshly painted. It also looks refurbished in some way. 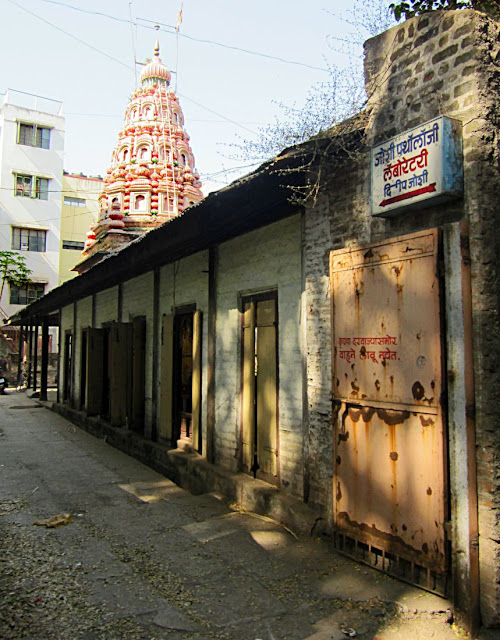 This is the view that one gets as one steps into the temple from the main door. The stone tiles of the flooring are shiny from use. 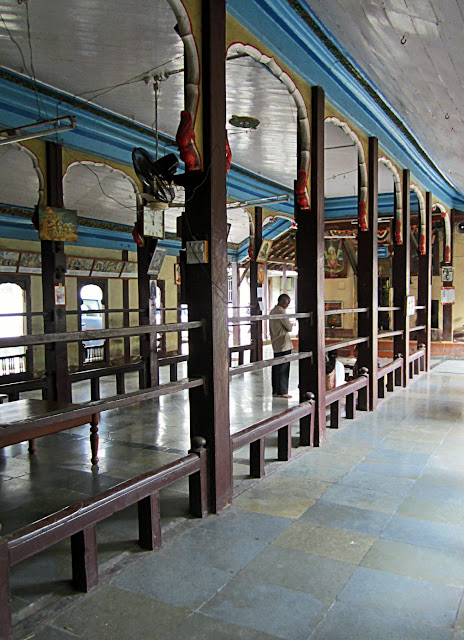 This is the area where the main diety of the temple resides. Narsimha and his consort Laxmi. 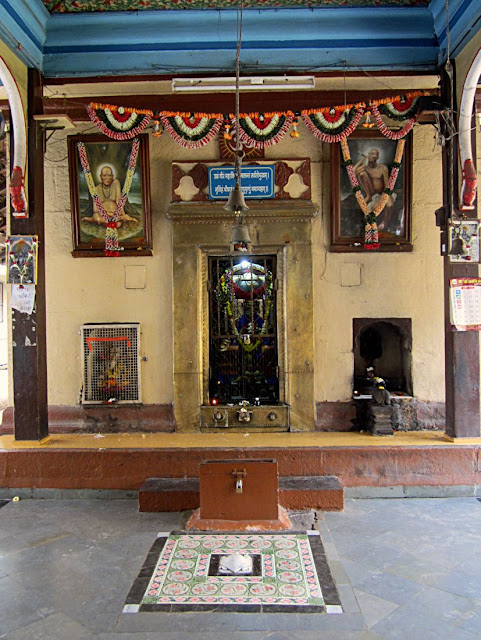 This is a close-up of the marble turtle seen in the above photograph. The turtle is sacred and is a cultural symbol for many Eastern cultures. 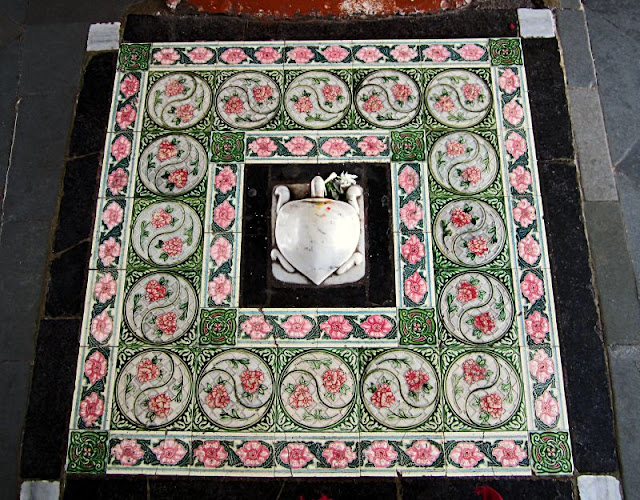 This is the image of the main diety inside the temple. Narsimha. A closer look near his left hand will reveal the head of Laxmi, near the flower garland. A heap of coconuts can be seen in a corner of the sanctum. These are given by devotees as offerings. 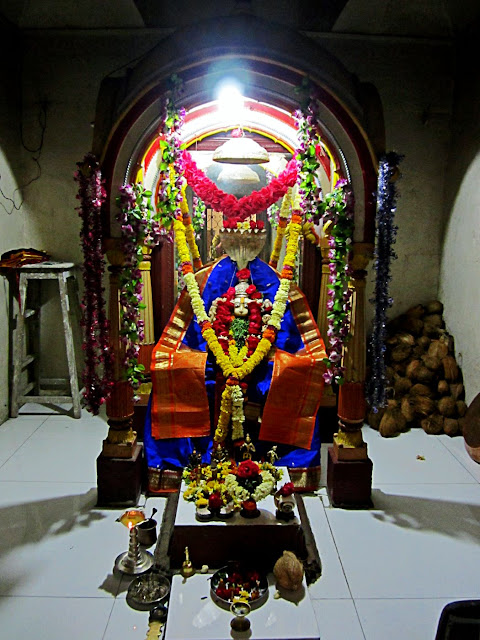 Related Photographs: Shiva Pindi or Lingam or Hanuman Temple
Or Temple Silhouettes or a Hindu Priest performing a Pooja